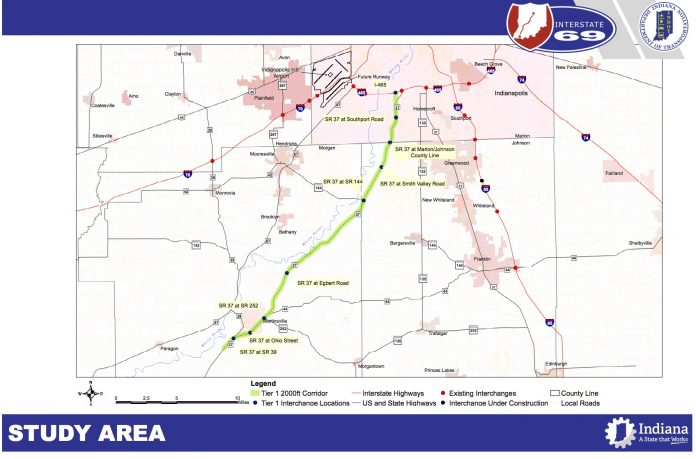 The Indiana Department of Transportation (INDOT) has released plans detailing the location of interchanges along the final leg of a highway that’s been under construction since 2008.

The information is expected to spark investment along the 30-mile corridor of Interstate 69 between Indianapolis and Martinsville, The Indianapolis Business Journal has reported.

The plans show 10 interchanges along the stretch, which cuts through Morgan, Johnson and Marion counties. IDNDOT will also build or reconstruct 16 overpasses and underpasses, eliminate 14 traffic signals and add 32 miles of access roads to reroute traffic.

“Those exits and interchanges are, for us, good news,” said Martinsville Mayor Shannon Kohl. “We can really plan a lot better now that we know what’s going on.”

Kohl said the lack of details cast a pall over development.

“No one was really wanting to invest here because they didn’t know what the plan was going to be,” she said.

Construction on the $1.5 billion stretch is still years away, the Associated Press reports. Funding for the project hasn’t yet been identified.

This segment will complete the route between Indianapolis and Evansville on the southwest border of the state. The section reaching Bloomington was completed in 2015. The stretch between Bloomington and Martinsville is expected to be finished next year.

Kohl said she thinks the highway will strengthen Martinsville’s connections to Bloomington and Indianapolis. She said that with shorter commute times, Martinsville could become a more attractive bedroom community for Indianapolis.

“Being between Bloomington and Indianapolis is a good thing that we never really have capitalized on,” Kohl said.