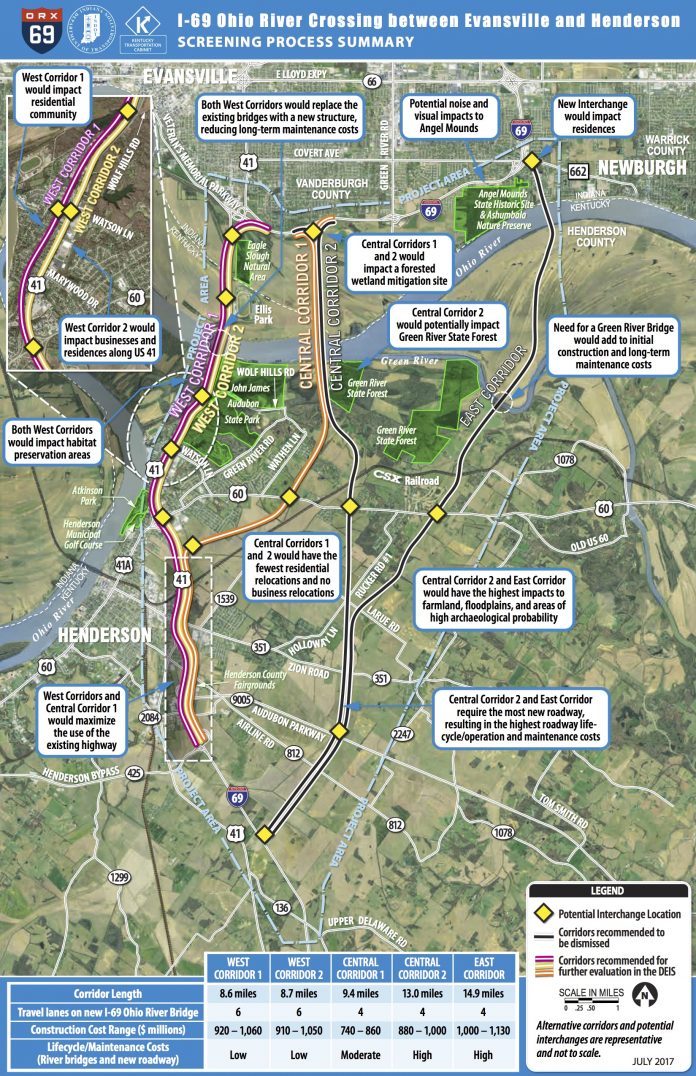 The I-69 Ohio River Crossing (I-69 ORX) project team has identified a short list of three corridors for the possible location of a new I-69 bridge. After completing the screening process, West Corridor 1, West Corridor 2 and Central Corridor 1 are identified as the ones with the greatest potential to meet the project’s purpose, the crossing team says in a news release. A No Build Alternative is also carried forward for comparison.

“We identified five broad corridors in April,” said Janelle Lemon, Indiana Department of Transportation project manager. “Since then, our project team has been collecting data for each corridor, along with gathering feedback from the public, agencies and stakeholders. This information has helped us identify the corridors that make the most sense for additional study.”

A wide variety of information has been gathered for each corridor, including where homes and businesses are located, along with identifying historic structures and potential environmental impacts.

“Our project team is moving forward to further develop alternatives in each corridor,” said Marshall Carrier, Kentucky Transportation Cabinet project manager. “This work will include detailed field surveys, impact assessment and engineering analyses. No decisions have been made. Our team will continue to develop each corridor and study cost, impact, community support and financial feasibility.”

Two corridors are not recommended for further evaluation, the East Corridor and Central Corridor 2.

The East Corridor is the longest corridor with the largest amount of new roadway, and would require a major bridge over the Green River. It has the highest estimated construction costs (at least $1 billion) and high maintenance costs. The East Corridor also has the greatest impact on farms, rivers and streams and floodplains.

Central Corridor 2 includes the second highest amount of new roadway and second-highest operations costs. It has second highest impacts to wetlands, river and streams, floodplains and farmland. While similar to Central Corridor 1, it has higher construction and long-term maintenance costs and is not recommended for further evaluation.

Three corridors are recommended for further evaluation in development of the Draft Environmental Impact Statement (DEIS): West Corridor 1, West Corridor 2 and Central Corridor 1. As required by law, a No Build Alternative is also carried forward for comparison. It assumes an I-69 Ohio River Crossing is not built, and provides a benchmark against which the impacts of other corridors can be compared. While these three corridors merit additional study, no decisions have been made on which is the best corridor.

Both West Corridors would replace the existing US 41 bridges, resulting in the lowest long-term maintenance costs for the states. The West Corridors have modest impacts to environmental resources, but both would impact many residences and businesses in Henderson.

“These are impacts that will be examined carefully and reviewed thoroughly,” said Carrier. “The West Corridors would keep traffic in the US 41 corridor, supporting its further development. We’ll continue to work with the Henderson community to better understand how I-69 could fit into the community’s long-term vision.”

Because impacts are comparable in most categories and estimated cost is similar ($910 million to just over $1 billion), the states feel both West Corridors warrant further study.

Central Corridor 1 is also recommended for further evaluation. It’s the shortest corridor, resulting in the least amount of new roadway. It has considerable impacts to farmland, wetlands and forested habitat, but would impact the fewest residences and no businesses.

Estimated construction costs for Central Corridor 1 are the lowest ($740-$860 million), however the cost estimate does not include a long-term solution for the US 41 bridges.

Development of this corridor will include identifying a long-term solution for the US 41 bridges, including:

The project team will further develop alternatives in each corridor to a more advanced level of design, and will carefully study each corridor to examine cost, impact, community support and financial feasibility.

A preferred alternative is expected to be identified by fall of 2018. A Record of Decision (ROD) is expected by late 2019.

The information gathered will allow executive leadership in both states to make an informed decision and deliver an I-69 Ohio River Crossing.

The short list of corridors will be discussed in detail at two upcoming open houses.

Each open house will include a presentation at 6 p.m. The rest of the event is an open house format, with several information stations.

Attendees will have a chance to talk one-on-one with leaders of the I-69 ORX team, hear more about the project and ask questions. Comment cards will be provided.

Henderson Area Rapid Transit (HART) will run a special, free route for the Henderson open house. Riders will depart from the central dispatch point at Third and Main streets at 5:00 p.m., 5:30 p.m. and 5:45 p.m. Buses will transport participants back to Third and Main at 7 p.m.