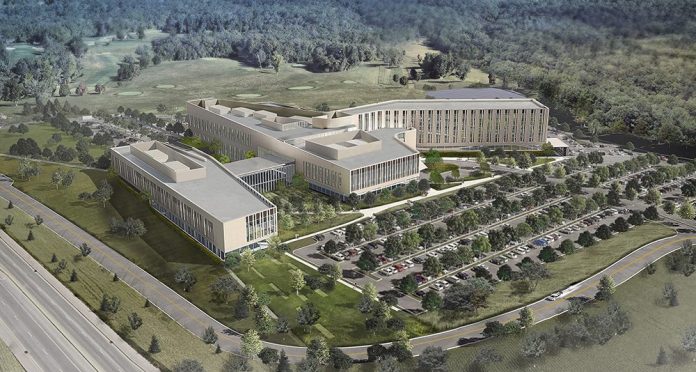 Indiana University’s Board of Trustees has approved design plans for the new IU Health Bloomington Hospital at their Aug. 11 meeting.

The more than 700,000-sq, ft, facility includes both the hospital and an academic center. It will be located along State Rd, 45/46 at the current site of the IU golf driving range. Trustees approved that site two years ago, Indiana Public Media reports.

The building itself will feature Indiana limestone and architecture drawn from other Indiana University buildings. The design also includes more than 1,500 parking spaces and four gardens. IU Health officials are aiming for LEED silver environmental certification for the hospital complex and gold certification for the academic building.

“Blending the educational component of training future health care professionals just made sense, so that’s going to be a huge change for us,” he says.

Construction of the hospital hasn’t started, but the project is expected to be complete in 2020.

In 2015,HOK was awarded an agreement to ” lead the planning and design three priority projects including Indiana’s only academic health centers” including the Bloomington campus.

During the same meeting, trustees also approved the separation of the IU School of Education into two separate schools. One will be located at IU Bloomington and the second at IUPUI in Indianapolis.