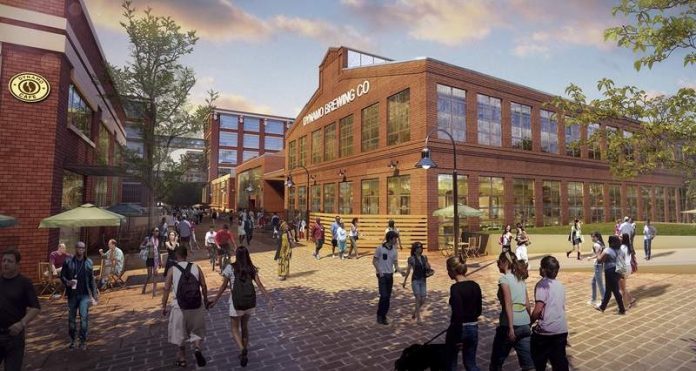 RTM Ventures has completed a $5.5 million acquisition of the 39-acre property just south of Fort Wayne’s downtown, setting the stage for a $300,000 million-mixed use development.

RTM Ventures, a joint venture including Cross Street Partners, of Baltimore; Greenstreet Ltd., of Indianapolis; and Biggs Development, of Decatur, has named the development “Electric Works”.

Fort Wayne-based Weigand Construction had earlier been selected as the project’s construction manager.

“Every closing of a real estate transaction – anything of this size – is significant,” developer Kevin Biggs said after the sale transaction was announced late September. “As they say, it’s never a done deal until it’s done.”

“GE appreciates the leadership of the city of Fort Wayne, Mayor Henry, the state of Indiana and Greater Fort Wayne Inc., and their support to reposition the site in ways that will benefit the local Fort Wayne community and meet the needs of the local market,” GE spokesperson Tara DiJulio said in a statement.

The developers will now start removing hazardous materials, with an expected budget of $3.5 million to $9 million for remediation. The reason for the variability is the unknown percentage of lead paint in the buildings — the more lead, the higher the disposal costs.

Crews will also remove unsightly, metal add-ons to some of the historic buildings, the Journal Gazette reports.

RTM Ventures’ financial team will use the coming months to apply for and secure various federal and state grants that encourage developers to renovate abandoned industrial buildings with historic significance.

Meanwhile, the sales crew will line up commitments from anchor tenants for Phase I, which will be 691,000 sq. ft. west of Broadway.

The developers plan to put big pieces of the puzzle in place before allowing smaller potential tenants to sign letters of intent. Occupancy is forecast for late 2019 or early 2020, the newspaper reports.

“We’ve been very pleased with the amount of interest people are expressing,” said Biggs, who declined to reveal names.

The partners provided a breakdown of how many square feet will be devoted to each of various uses. The formula has been successful in other cities, Biggs said.

Electric Works’ Phase I is expected to include: