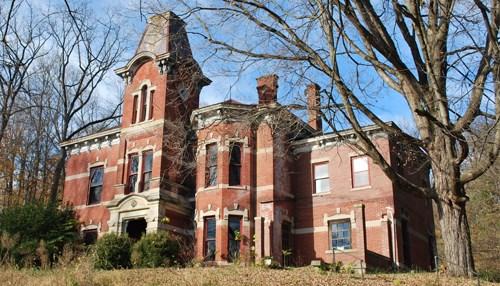 The 137-year-old Newkirk Mansion is currently under restoration as new owners, Mike and Jenny Sparks, have bought the property for $56,000 from Indiana Landmarks.

The organization originally purchased the home for $65,000 but agreed to sell it to the Connersville couple because of their promise to restore the historic structure, which is included in Indiana Landmarks’ 10 Most Endangered List.

The Newkirk Mansion was built in 1880 and later converted into a group of apartments. In the 1960s, it was turned into a nursing home. The Sparks have initially bought the home in 1980s and owned it until the early 1990s, claiming that during their ownership the home was in good shape.

The structure has only started to grow dilapidated after the Sparks sold it to another owner who was killed in a car crash two years after purchase. Since then, the Newkirk Mansion has suffered major damage including a leaky roof and a series of vandals that destroyed its original features. Also, an arson fire last April has ravaged the home’s two-story carriage house.

According to Inside Indiana Business, the couple has already started restoration efforts by clearing out the overgrowth that surrounds the home. The Sparks aim to fully stabilize the mansion and to fix the roof before the winter season. Because of the severity of damage that the house has sustained, restoration is expected to take several years to complete.

“We’re trying to create a historic district in Connersville, and we hope this project helps demonstrate that protection is a positive things,” says Mark Sparks. “If Indiana Landmarks had not put the Newkirk Mansion on the 10 Most Endangered list, we wouldn’t own it, and it would still be deteriorating and vulnerable. We could have lost it entirely.”

The Sparks are hosting a public open-house tour on Oct. 28 and 29.