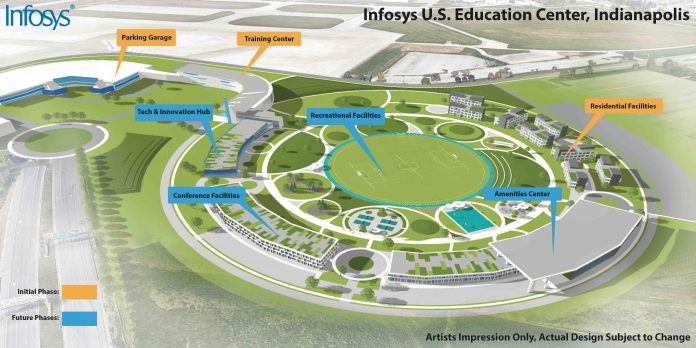 Infosys, a technology and consulting business, says, its plans to establish a U.S. Education Center in Indianapolis with a $245 million, 141-acre and 786,000 sq. ft. campus at the site of the former Indianapolis airport terminal site.

Initially, the company says it will invest $35 million, acquiring 70.5 acres and building out the first 125,000 sq. ft. that will comprise a training center and a 250-person residential facility.

With its growth, the company plans to increase its workforce in Indiana to 3,000 by the end of 2023.

“Today’s announcement with Infosys is a big win—not just for Indiana but for the nation as a whole, which is why I’m glad vice-president Pence was able to join us,” Gov. Eric Holcomb said at an April 26 news conference. “Infosys’ state-of-the-art training facility will teach thousands of folks from across America right here on Indiana soil. And, it will help prepare more current and future Hoosiers for success in our rapidly evolving, global economy.”

Infosys has an option to double the initial footprint in the future, on the site of the old Indianapolis airport terminal at the intersection of Sam Jones Expressway and South High School Road to establish what the news release says is :a vast, state-of-the-art training center that will feature environmentally sustainable buildings and green spaces.”

“Infosys’ vision for the finished site includes regeneration of the area to feature walkways, outdoor spaces and recreational facilities,” the statement said.

“We are excited to partner with Indiana to grow our U.S. presence by building our U.S. Education Center here, which is dedicated to continuous learning and incubating the skills of the future,” said Infosys president Ravi Kumar. “At Infosys, we have always invested in advanced technology and skills and bring deep experience from running the largest corporate training facility in the world. Our new Indianapolis facility will prepare our American employees—and those of our clients—to master the kinds of advanced skills that are now required to succeed in our digital future.”

Infosys plans to break ground on the first phase, the U.S. Education Center, before the end of 2018 and anticipates its completion by the end of 2020.  The company recently cut the ribbon on its initial 35,000-sq. ft.. Technology and Innovation Hub at OneAmerica, which already hosts more than 150 employees, and continues to hire for developers, analysts, architects, domain consultants and other technology professionals.

“This project is a prime example of the airport’s commitment to delivering public value to the community,” said Mario Rodriguez, Indianapolis Airport Authority executive director. “Through a collaborative effort with the city and state, we’re proud to welcome Infosys to the Indianapolis International Airport campus. Their training facility will help to transform lives and connect people as Indy continues to attract tech talent by the plane full.”

Founded in India in 1981, Infosys now has a presence in more than 45 countries across the globe and has more than 16 offices in the U.S. In 2012, the company, which employs more than 200,000 people, became the first Indian company to begin trading on the New York Stock Exchange. In 2017, Infosys announced plans to establish four new state-of-the-art technology and innovation hubs in the U.S., with the first one in Indiana, and create 10,000 new American jobs by the spring of 2019.

Today’s announcement and vision for growing Infosys’ presence in Indiana is being supported by the state of Indiana, the city of Indianapolis and the Indianapolis Airport Authority. Pending approval from the Indiana Economic Development Corp. (IEDC) Board of Directors, the IEDC will offer Infosys up to $56.5 million in conditional tax credits and up to $1.5 million in training grants based on the company’s plans to create 3,000 new jobs by 2023. These incentives are performance-based, meaning until Hoosiers are hired, the company is not eligible to claim incentives. The IEDC will also offer Infosys up to $6 million in conditional tax credits from the Hoosier Business Investment program based on the company’s significant capital investment plans.

The city of Indianapolis will facilitate the rehabilitation and transfer of the existing 2,000-car parking garage to Infosys. Additionally, the city will contribute real estate and necessary improvements over the course of the phased project to include $8 million in infrastructure improvements and up to $9.8 million in real estate. The IEDC will provide up to $20 million over 10 years from the Industrial Development Grant Fund to support these improvements at and surrounding the campus development.

These incentives are subject to the approval of the IEDC Board of Directors, Indianapolis Airport Authority Board, Metropolitan Development Commission and Indianapolis City County Council.