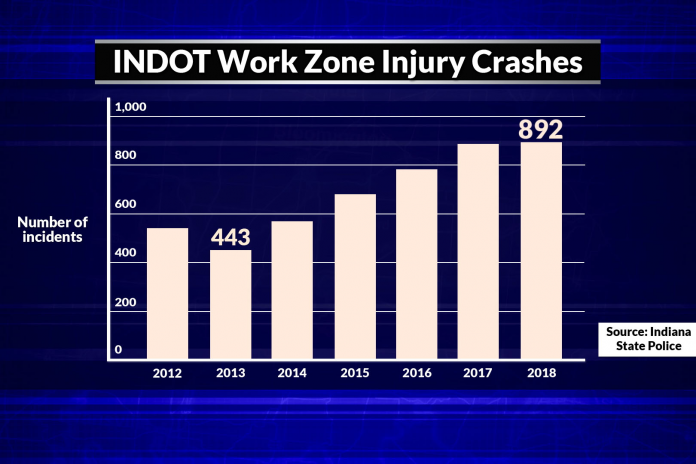 What can be done to improve safety on Indiana’s road construction projects?

Indiana Public Media has published a report suggesting that changes need to be made to reduce construction zone accidents, often caused by distracted drivers.

One  suggested idea is to completely shut down the roads to non-construction traffic.

“You can feel the semis,” said Fox Contractors Corporation superintendent Jason Brown. “If you’re too close to the barrels or the devices they have between us and the traffic, the semis will blow your hard hat off your head.”

“The phone situation is bad, the distracted driving is bad,” he says. “You can look down a line of traffic and you can see people aren’t looking up. They’re looking down. What’s really scary is when you see semi drivers doing it.”

The Associated General Contractors of America (AGCA) discovered in a national highway work zone survey that more than 50 percent of contracting firms have experience a crash.

In Indiana, work zone crashes resulting in injury have nearly doubled in the last five years.

Work zone crashes in Indiana that resulted in injury have nearly doubled in the last five years.

“The vast majority of the accidents that occur in work zones are with the traveling public, the individuals who are driving into the work zones, and those are where the accidents occur and frankly where most of the injuries occur,” he says. “It’s not to the workers as much as it is the drivers.”

The idea of shutting down roads completely has been proven effective with work several months ago on sections of Intestate 485.

INDOT officials said that, along with increased safety, the project took only 18 days to complete, when it would have normally required several months to finish — and that saved as much as 30 to 40 percent on the $10.2 million project.

“We at INDOT are continually thinking of ways to make those work zones safer and balance our need to do work zone construction to maintain our highways, but also keep the folks that work on them and the folks that use them safe,” said INDOT spokesperson Scott Manning.

Fox Contractors safety director Sheryl Wiser says the temporary inconvenience of closing more roads is ultimately going to provide the safest work zone, so she thinks things are moving in the right direction.

“But when there’s a tragedy, it just tells us that we’re moving too slow,” she says.

Meanwhile, Indiana Rep. Jim Pressel says he plans to file a bill that would add camera enforcement to work zones, which means drivers could receive a ticket if they are caught speeding. “I really just want to call attention to the fact that lives are at stake here,” Pressel says. “We need to notice this, and we need to better protect our workers.”

Hedgecock says nearly half of states have some form of camera enforcement in their work zones. Many in the field are in support of adding camera enforcement to work zones because they say, other than police presence, it’s likely the only way to get drivers to slow down.