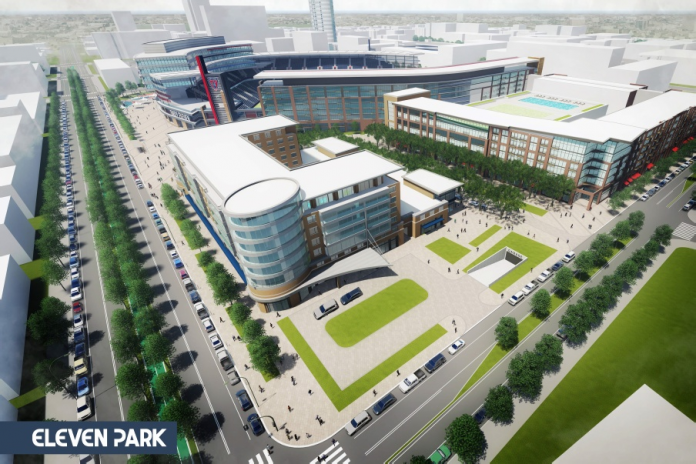 A legislative proposal to fund the $150 million Indy Eleven soccer stadium has been introduced. The proposed law would capture as much as $11 million in annual tax revenues to pay off the outdoor arena’s bonds.

The law introduced on Jan. 15 has been sent to the Senate Appropriations Committee. It would create the PDSA area for at least 30 years, funded by businesses, residents and possibly athletes living and working at Eleven Park. These funds would be directed to the Capital Improvement Board (CIB), which would own the stadium.

Developer-backed bonds issued by the city would fund the stadium and other areas of public development, including underground parking garages and a plaza.

A spokesman for the proposed Eleven Park development issued a statement on Jan. 14 calling the proposal “a creative, taxpayer-friendly public-private partnership” that would not require state or local governments to spend tax revenue they already are receiving, Indianapolis Business Journal (IBJ) reports.

“Eleven Park will continue to work with all stakeholders, including Sen. Sandlin and other supportive policy makers to support this piece of legislation or other legislative pathways that will make this transformative neighborhood development a reality.”

The bill places conditions on Eleven Park’s site development and the structure of any lease agreements between CIB and Indy Eleven or other major stadium tenants, notably the length of such a lease and future improvements.

The proposed legislation says the CIB would not be able to secure a lease with Indy Eleven that exceeds 40 years. Although Ozdemir has said the team would be willing to pay all of the stadium’s operating costs, the bill puts the commitment in writing.

CIB president Melina Kennedy told IBJ that neither she nor the board’s counsel has had an opportunity to review the legislation. The CIB did not have a role in drafting the bill, she said.

“We’ve given Indy Eleven our thoughts on what we would support,” she said, noting that if the bill is consistent with those considerations, the CIB would line up behind the bill.

The CIB would be required to undergo a public process and put the project out to bid to interested parties before any construction commenced. Generally, companies perceived to have a conflict of interest are not permitted to participate in public bids, meaning that Ozdemir’s Keystone Corp. might be excluded.

IBJ says Sandlin’s bill was introduced the same day that Senate appropriations chairman Ryan Mishler introduced Senate Bill 7, increasing CIB funding as part of a long-term plan to improve its existing facilities, including the Indiana Convention Center and Bankers Life Fieldhouse. Sandlin said he would not be surprised if his proposal is merged into the Mishler’s bill and is hopeful about its prospects for passage.