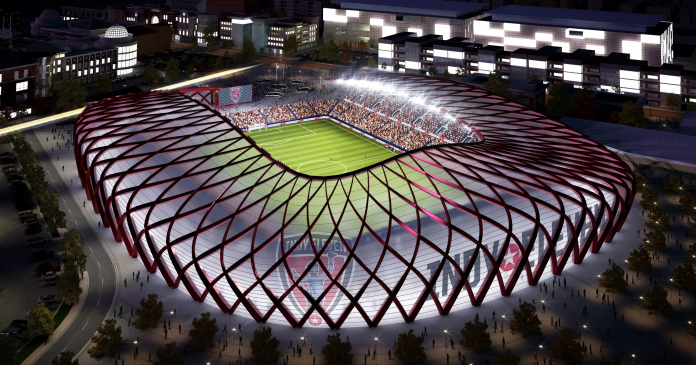 Ozdemir told a state senate committee on Feb. 14 that if it would give the Capitol Improvement Board (CIB) the go ahead to build the stadium, he would construct a $400 million mixed use development right next door and the tax money raised by that project could pay off the CIB’s construction bonds.

“We need to have a permanent home. We are drawing 10,000 now. We strongly believe we would get over 15,000 easily,” Ozdemir said. “Without a permanent home its impossible to have a global organization and for us to have any chance to move up to the next level we have to have a soccer stadium.”

“We need a permanent home to make sure Indiana has a professional soccer team,” Fox 59 quoted Ozdemir as saying.

The funding bill had been proposed by Sen. Jack Sandlin, and there was no opposition voiced at Senate appropriations committee.

He expects a special taxing district would encompass the development’s footprint. The stadium would capture all taxes on money spent there and return those revenues to the CIB, which would own the stadium.

Ozdemir says he has pledged to pay for upkeep and construction cost overruns.

“This is not a stadium anymore. It is a transformational project, so its best to make sure it’s the right place so we will have not only a large impact where we are but also great impact for the neighborhood we’re gonna be in,” he said. “Downtown is the logical site. A lot of our sports teams are based here. Indianapolis is a sport capital.”

Options include the now-shuttered Broad Ripple High School, the vicinity near 38th Street and Lafayette Road or empty lots south of Lucas Oil Stadium approaching the banks of the White River.

“Wherever we are gonna go it will have a major impact on the neighborhood and we will not go to an area that the neighborhood doesn’t want it,” said Ozdemir. “We will not invest this much in these sites we’re looking at without a soccer stadium.”

Sandlin’s bill would give General Assembly blessing to the City County Council and the CIB to craft the funding proposal without additional state funds appropriations, the broadcaster reported.

Final debate on the bill has been put off until Feb. 21 when lawmakers will consider a proposal to provide the CIB with $8 million per year until 2041 to fund improvements to Bankers Life Fieldhouse, Lucas Oil Stadium, Victory Field and the Indiana Convention Center and attach Sandlin’s proposal to the main legislation, Fox 59 reported.