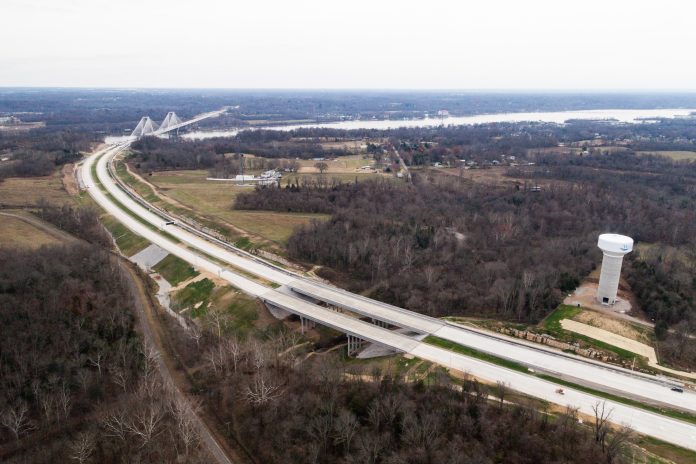 The East End Crossing features the new Lewis and Clark Bridge, a 2,500-ft. main span, twin-tower cable-stayed structure across the Ohio River. The bridge includes two diamond towers rising 300 feet above the river, with 104 stay cables. It also contains a shared-use path for pedestrians and bicyclists.

Additional features of the roadway project include a 1,700-ft. twin-bore tunnel, along with associated roadway improvements and other related infrastructure work.

“The success of this project is the result of a shared vision from state officials, community members, and the hundreds of men and women who have worked so safely and tirelessly over the past three years,” Walsh Construction co-chairman Matt Walsh said in a statement. “This project serves as a model for what can be accomplished in the rebuilding of America’s infrastructure.”

“After decades of discussion and stalled progress, many people thought we’d never see this moment,” Holcomb said. “Now, communities on both sides of the Ohio River will reap the benefit of improved, safe interstate access.”

Substantial completion of the East End Crossing will provide several significant benefits to the Louisville and Southern Indiana area, including convenient access for residents and travelers passing through the Louisville area.

Construction of the East End Crossing commenced in June 2013, and more than 3.3 million man-hours were elapsed by the construction team over the project’s three year timeline.

Additionally, the project received an Envision® Platinum Sustainability Award from the Institute for Sustainable Infrastructure for exceptional achievements in sustainable infrastructure design, construction and operations.

The East End Crossing is part of an overall $2.3 billion Louisville-Southern Indiana Ohio River Bridges Program, which included the construction of the Abraham Lincoln Bridge in downtown Louisville, also built by Walsh Construction.

Walsh Construction is a member of The Walsh Group, a 118-year old family-owned company providing design, build, finance, operation and activation services. The Walsh Group operates across 19 regional offices, and is listed as the largest bridge builder and 11th largest contractor in the United States per Engineering News-Record, 2016.