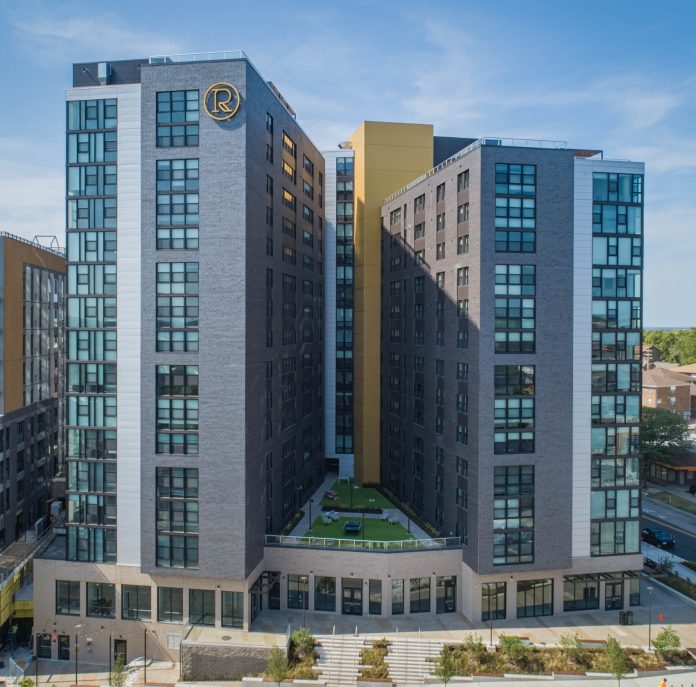 Construction on housing designed for Purdue University students has now been completed.

The Rise on Chauncy was built for CA Student Living, the student housing division of Chicago-based CA Ventures and by Brinkmann Constructors.

At 458,000-sq.ft and topping out at 16 stories, Rise is the tallest building in West Lafayette.

The apartment features 283 fully furnished luxury apartments ranging from studios up to four-bedroom units with a total of 675 beds. Construction took 19 months.

According to Brinkmann, there site and the design posed challenges. At the closest point, the new building was just 8-inches from a neighboring 12-story building that began construction at the exact same time. This complication required extensive coordination of the tower crane with the neighboring tower crane throughout the duration of the project and close monitoring of the earth retention design for each project was critical. Due to this near zero lot line, there was very little lay-down space for equipment and materials and project managers had to relay on “just in time” deliveries.

The building schedule did not allow for the building’s exterior skin to wait until the concrete structure was complete. Brinkmann placed electric mast climbing scaffolding around the perimeter of the building to allow the building structure and skin trades to work simultaneously by alternating which of the tower sections they were working on. This also provided a safer working environment by not having one trade working directly over another. This allowed the interior drywall to begin much earlier, in fact, at one time the team was in the finish phase of the units while still placing the concrete frame.