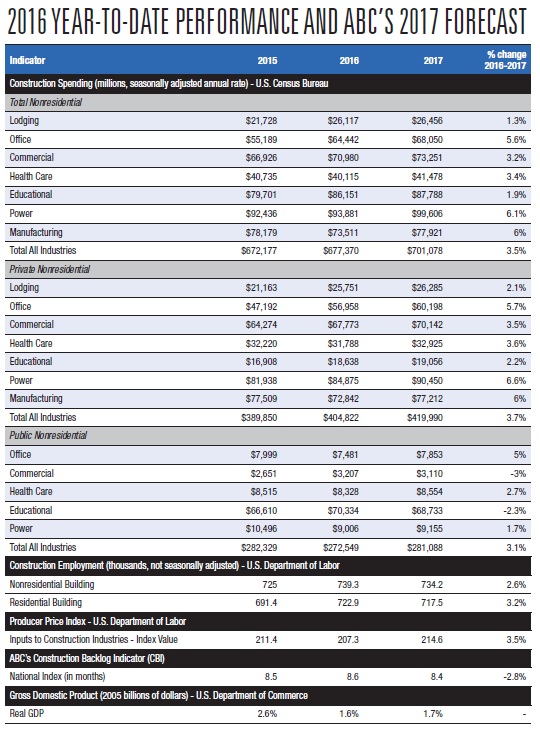 Associated Builders and Contractors (ABC) forecasts a slowdown of growth in the U.S. commercial and industrial construction industries in 2017. While contractors are vulnerable to rising commodity prices and potential interest rate increases in 2017, the middling consumer-led recovery should still lead to modest growth in construction spending and employment.

“The U.S. economy continues to expand amid a weak global economy and, despite risks to the construction industry, nonresidential spending should expand 3.5 percent in 2017,” ABC chief economist Anirban Basu said in a  statement.

“For more than two years, the Federal Reserve has been able to focus heavily on stimulating economic growth and moving the nation toward full employment. However, as commodity prices, including energy prices, firm up and labor costs march higher, the Federal Reserve will need to be more concerned about rising inflation expectations going forward. Associated increases in interest rates could have significantly negative impacts on certain asset prices, including stocks, bonds, commercial real estate and apartment buildings.

“However, there is a bullish scenario,” said Basu. “According to the Bureau of Economic Analysis, the average age of all fixed assets, including structures such as factories and hospitals, stands at 23 years—the oldest on record tracing back to 1925—and there is a collective awareness among American enterprises that they will need to replace much of their capital stock in future years. In addition, now rising energy prices could produce more investment and rising earnings—potentially translating into better support for asset prices, ongoing hiring and consumer spending.

“Despite some headwinds, many construction firms continue to report that they remain busy and ABC’s most recent Construction Confidence Index revealed that while construction firm leaders are not quite as confident as they were in prior quarters, most continue to expect growth in sales, margins and staffing levels,” Basu said.