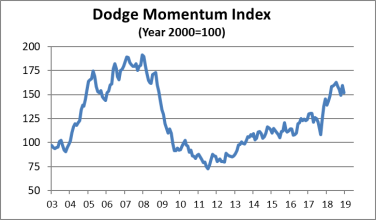 The decline in December was due to a 7.6% drop in the commercial component of the Momentum Index, while the institutional component fell 0.7%.

For the full year, the Momentum Index gained 4.3% from the end of 2017, with the institutional component increasing 8.5% over the year and the commercial component moving 1.6% higher.

While the overall Momentum Index registered a gain for the full year, this was realized in the first half of 2018. During the final six months of the year, the Momentum Index fell 4.4%, with the commercial component losing 7.2% and the institutional component remaining essentially flat.

This suggests that spending for commercial buildings may be reaching its cyclical peak, while spending for institutional buildings continues to be supported by the stabilizing influence of public funding for projects such as schools and transportation terminals.

In December, seven projects each with a value of $100 million or more entered planning. The two leading institutional projects were a $140 million science and engineering building at Northeastern University in Boston MA and the $120 million Trophy Park Sports Complex in Jackson NJ. The two leading commercial projects were a $160 million addition and renovation project at the Two Penn Plaza office complex in New York NY and the $125 million Bellevue Cadillac office towers in Bellevue WA.